Meet this month’s Members Spotlight, William A Muller, MD, PhD, Professor of Pathology at the Feinberg School of Medicine, Northwestern University. Dr. Muller is a longtime ASIP member and recently assumed his position as 2022-2023 President for the Society. He has served on numerous ASIP committees and in 2013 received the ASIP Rous-Whipple Award. 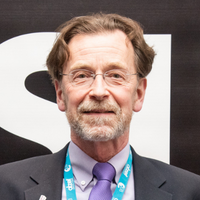 Dr. Muller received his PhD from Rockefeller University in 1981, and his MD from Cornell Weill Medical College in 1982. He completed an internship in Internal Medicine at Massachusetts General Hospital followed by a Residency in Academic Pathology at Brigham and Women's Hospital in Boston. Following Residency, Dr. Muller was recruited back to The Rockefeller University to start an independent career as a researcher in 1987. At Rockefeller, he combined interests and training in leukocytes and vascular biology to study their interaction during the inflammatory response, focusing on basic mechanisms that would be relevant to all inflammatory diseases. In 1997, he was recruited to join the faculty at Weill Cornell Medical Center full time, until being recruited to Northwestern as Chair of Pathology in 2007. Since stepping down as Chair in July, 2016, Dr. Muller has devoted most of his time gearing up his research lab and expanding into new areas including neurovascular inflammation (stroke) and tumor metastasis.

Favorite part about being an ASIP member?

Being an ASIP member is like being part of a very large family, all of whom you love. And the annual meetings are family reunions that I look forward to every year. There are many ASIP members in different scientific fields from mine, and I may not see them at other meetings throughout the year or keep up with their papers. However, when I see them at the ASIP annual meeting, it’s like reuniting with long-time friends. We catch up on science, catch up on family news, give each other new ideas, and serve as a support group for each other.

Who or what inspires you?

If I had to answer ‘who’, I would say my grandchildren, because they are so sweet and innocent and I am inspired daily to try to make the world better for them. But that sounds corny and probably everyone with grandchildren would answer that. “What inspires me?” Nature inspires me. Everything about it, really, but mostly biology. The physical world—at least the one that we can sense—is governed by rules that we can describe and predict with equations. I believe that when we truly understand biology, it will be governed by such laws and equations, and seem simple, but we’re so far from understanding it at that level. Every time I think I understand something about a biological system, a disease, a cell, or a molecule, I find an exception to the rule…or find out it is more complicated than I thought. However, nature figured it all out a long time ago. I am inspired by the living world to try to understand just one small part of it.

Where is the next destination on your travel bucket list?

What is the next place I want to travel on my bucket list? Are you kidding? I missed traveling so much during the COVID shutdown that traveling to Philadelphia for EB2022 was fun! I want to go to most of the places I’ve never been: Japan, Patagonia, France, Israel, New Zeeland, etc. and I want to go back to places I’ve been to that I love: Australia, Germany (especially Munich), Great Britain, The Netherlands, Spain, Italy, etc. However, the next place I’m looking forward to traveling is Oakland, CA in October for the International Vascular Biology Meeting, which ASIP is co-sponsoring.