The Marion and Lawrence (Larry) Muller Memorial Fund - ASIP Trainee Scholar Award for Excellence in Inflammation Research will be awarded to an ASIP trainee member who submits an abstract as first author to the annual meeting that presents outstanding research on the underlying molecular and cellular mechanisms of inflammation in general or inflammatory disease. The awardee will be chosen by a committee based on review of submitted abstracts. The awardee will receive a stipend of $750 to defray expenses of travel to the meeting as well as a Certificate of Achievement. 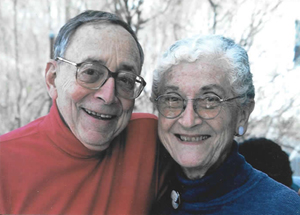 Marion Muller (nee Kushner) was born on September 28, 1922 in Brooklyn, NY. She grew up in a tenement in Brownsville. She attended City College of NY and worked as an elementary school teacher and in the advertising business as a young woman. She met Larry through mutual friends and the rest, as they say, is history. Upon the birth of her first child, Marion became a full-time homemaker dedicating herself to raising her three boys to be good people. She was an avid painter and in later years re-immersed herself in writing. She became a regular contributor to the graphic design magazine U&lc. She published biographies of two major figures in mid-20th centure art direction and production, and wrote dozens of short stories that remained in hanging folders and floppy disks. Her favorite activity was getting together with family. She spent her life caring for other people and when asked to make a decision, her stock answer was always, “Whatever is best for you.”

Lawrence J. (Larry) Muller was born in New York City on April 8, 1919, and grew up on the south shore of Long Island, where he was an avid sailor. After graduating from Lawrence High School he enrolled briefly at MIT, where he became the original college dropout, leaving to take night courses in writing instead. When WWII broke out, he memorized the eye chart so that his poor vision would not disqualify him from enlisting. He served as a sergeant in the Army Air Force in the Italian campaign. After the war, he wrote copy for several major advertising agencies before starting his own with two partners and little else. He worked tirelessly for six years to make the agency successful, then became the Sugar Ray Leonard of the advertising world retiring from the business twice only to go back again a year or two later. In his spare time, Larry loved playing anything with his sons, gardening, and reading. He had a fantastic sense of humor and a keen intellect. In his retirements he read the New York Times cover to cover daily and devoured at least one book a week.

Marion and Larry were married in 1951 and after living in Manhattan for several years moved to Hewlett, NY in 1956 where they raised their three sons. They lived in the same house for 51 years and the house became a home and the center of the world for their family and extended family. They took great pleasure in seeing their children and grandchildren pursue their dreams. Hence, the award for Research in Inflammation honors their encouragement of me pursuing my career through the high points and low points. After many happy years together, they both tragically developed and succumbed to neurodegenerative diseases. The award for Research in Neurodegenerative Disease is in memory of this and the hope that research will soon find treatments for these conditions.

Marion developed Primary lateral sclerosis (an upper motor neuron disease that resembles ALS, but with spasticity) and with ascending paralysis gradually became quadriplegic. The tragic irony was that the woman who spent her life taking care of other people was now dependent on others. Larry developed Alzheimer’s dementia. I realized something was wrong when I gave him a novel for his birthday and a week later he had not even started to read it. He was bright enough to cover for his cognitive defects for many years. Eventually they had to move into assisted living. Their love affair never ended and the joke in the family was that between the two of them they had a good mind and a good body. They took care of each other until Marion died in 2007. Larry lived on until 2014, dying one day after his 95th birthday. Throughout the entire time, he never lost his sense of humor or easygoing nature, making him beloved by all who helped in his care.